I was reading the news and found an article about the inappropriate text messages sent by a person working at a Christian ministry. This person had targeted young girls and now the girls were speaking out about this. It was appalling to read, but sadly it is a very familiar story of our days. I spoke to a few friends who said that as parents they’re struggling to explain the reality to their teenagers and pre-teens.

It is a hard conversation to have, particularly when you don’t want to seem like you’re bashing Christians. As Christians we’ve been taught that we must not talk ill of the anointed of God and this makes it extremely difficult for us to talk about what is going on- for fear of repercussion, both supernaturally as well as earthly.

I think there’s been a fundamental shift of the perception of God men due to the nature of these horrendous allegations, sadly more are true than not.

The questions that mostly get asked are, “how can a ‘man of God’ do that?” “How could he sin like that?”

We need to explore the answers to these questions from the Bible. We all know the verse in Romans 3:23, “…for all have sinned and fall short of the glory of God”. I think we need to delve a little deeper into that chapter. It goes on to say that people are made right in God through Jesus (v25-26) and that God judges people fairly.

I found verse 27 onwards to be the most intriguing. It translates that ‘being a person of faith is no reason to boast’ which indirectly means that we as Christians have no reason to uphold a so-called ‘man of faith’ in any greater position to ourselves. Verse 31 says that by our faith we actually uphold the laws of the land- which means that by no means is a Christian pastor or preacher or someone who ‘speaks to God’ or ‘prophesies’ above the laws in force by our governments.

Too often Christian leaders accused of horrendous atrocities believe that they have power over the common man because they in close communion with God. This is again contradictory to the Word of God. 1 John 1:8 says that if anyone believes that they are without sin then the truth is not in them. If we flip that around it means that if we believe any man is sinless, we are deceiving ourselves.

We, as believers need to find the truth in God’s word. We need to as parents also be able to have honest discussions with our children about the risks that come with trusting people. We need to allow our children to come tell us when they have experienced something that they feel is inappropriate.

I have experienced and witnessed parents who diminish the impact of what has happened to their children and make excuses for the actions of the ‘man of God.’

Let’s take the very same example that prompted me to write this blog. If a teenage girl tells her parents that she has received inappropriate texts from her local youth pastor, her parents might have one of two reactions.

One- they tell their child that the pastor didn’t mean anything by it and that he or she was trying to talk or behave like the ‘youngsters’ of this generation or two, the parents would yell at the child and either blame them for instigating the text message exchange or say that God will punish them for falsely blaming a ‘man of God.’

Do you see how neither response is helpful?

How can you blame your child who has mustered up so much courage to tell you that they don’t feel safe? Your children know how you would react and yet choose to tell you something that is deeply embarrassing and hurtful, and if we don’t trust or acknowledge their pain, then you have lost their trust forever.

If this was any other person not using the church or God as their shield and had sent inappropriate texts, then would we have immediately reacted differently. Why?

Is it because we allow these ‘men of God’ to have that power over our children?

No man is holy. Only God is Holy.

We cannot expect man to leave the sin that he is born with because temptation surrounds all of us in some shape or form.

We must teach our children these fundamental Christian values. Even the man after God’s own heart fell to carnal sin, so how can we behave as if this sin doesn’t exist in so called ‘holy’ men.

It has been a challenging post to write, but we must allow our children to come talk to us freely without the fear of condemnation, because as parents we are put on earth to protect them and be their defence in this world.

Our foundation as Christians must lie in Romans 3:10 “As it is written: “There is no one righteous, not even one…”

There are no God-men, there is but one Holy God. 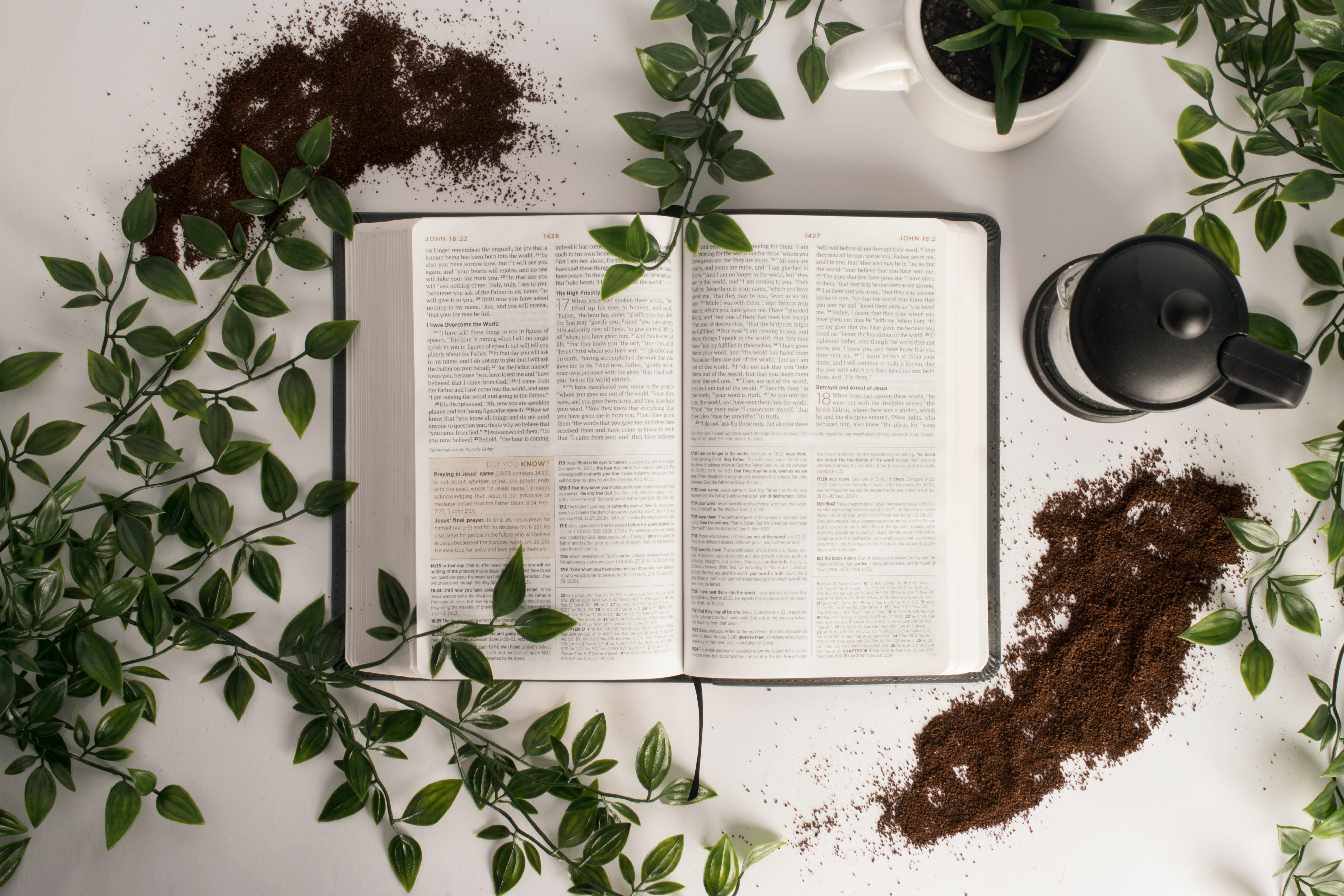 It amazes me about how strong we actually are. God did not create a weak creature, He created man in His likeness and as much as I hate to say it, it takes a real rough patch before we can see that strength in ourselves.

I was forced out of a 10 year marriage, and I’ve never experienced the emotional highs and lows like I did when my marriage failed. I always considered myself as a reasonably successful person, and I thought I was a good Christian who kept my focus on God. It took an extremely uncomfortable and unsettling phase of my life for me to realise that I hadn’t really kept my focus on God. I was doing all the right things, taking care of the kids, house, family and career etc etc, but the very blessings that God gave had taken His place on the throne.

I understood His heart as I too lay at the foot of the broom tree (1 Kings 19:5). It took a season of utter despair to see that my focus had completely slipped from what I was called to do. I knew my talents, I knew my calling and I thought I was doing the right thing by putting my family first.

God unfortunately doesn’t see it like that. He knows the blessings He’s given us, our responsibilities and what our priorities are, and yet He gives us the strength to focus on our greater calling, because our sole focus in life should be to make disciples (Matt. 28:16-20). Yes, taking care of the family and career is important. The mortgage isn’t going to pay itself, I get all that…but His calling on our life is greater and my life is a simple example of the strength He gives us to handle ALL OF IT!

I had a talent and I had buried it in the ground (Matt. 25:14-30) and God wasn’t having any of it. Let’s get this clear, I am in no way happy with my failed marriage but feeding on God’s word revealed something pretty clearly. If the devil did it, God had to have allowed it and if God allowed it, He’s got me covered…so either way, I have nothing to worry about. God knew the strength He created me with, and probably each of you reading this as well. The manufacturer knows His creations. He needed me to go through the season that I still am in, for me to see what His calling actually looked like and the greater impact my life could have.

He knows exactly what you’re capable of, and all He wants is a willing heart to accept the challenge.

Life was never designed to be easy… my destiny was designed in heaven and it’s all to easy to forget that we’re up against a spiritual enemy who we’re no match for without God.

Look at it like this, I’ve got a challenge against a defeated enemy with the Most High in my corner and victory is a guarantee…but I have to agree to be in this battle.

He leaves that choice to you…are you up to the challenge?

What you see is not what it is. There are so many layers to your life. People will look at where you are now and make decisions and have opinions on everything you’re going through. “You didn’t pray enough. You harboured un-forgiveness. You need Jesus. Have you backslidden?”

It’s absolutely enthralling how the human mind works. I probably heard it all. Here’s some priceless samples, I was alone because I had sinned. I was a false Christian who probably didn’t do what the Bible said. I was depressed because I was not really saved. The best one yet was, I was alone because I was a Christian who was saved.I’m in no way trying to diminish the pain you feel through words, and nothing compares to the pain that your own mind adds. The reason this tickles me now is because I always think back to what if people who had an opinion about everything were to see Joseph in the pit? or in prison? Or Elijah weeping under the broom tree? Or David in the cave of Adullam? Can you imagine what these mighty men of faith would have been subjected to? I’m sure David would have been told that he needed to get his life together and set himself right with God, because why else would he be suffering? I can’t even begin to imagine what Joseph would have heard.

I believe we as Christians who are probably not in the best place right now, need to understand that what people see now is not the whole story. It is important that we refuse to let the opinions of people determine our emotional state. Let’s face it, people are unreliable. Remember at Jesus’ crucifixion, it was Hosanna one day, crucify Him the next. The key to moving on and pressing forward is understanding who and where we stand before the Most Holy. We are accepted. We are loved. We are chosen.

Joseph need the pit to get to the throne. If we stop and think, the same people if they didn’t see Joseph in the pit or prison but second to the throne in Egypt, would have had very different things to say about Joseph’s walk with God. I strongly believe that this life was never designed to be easy because God never said it was going to be a breeze. He did say that He was going to make us stronger and refine us like gold…which needs fire. We need to take courage and encourage those among us who are not in the best place and assure them that there’s a higher calling. How could Jesus defeat the gates of hell if He never died? How could I be confident in Heaven if He didn’t die? Our pain makes us stronger and remember….God’s got you!